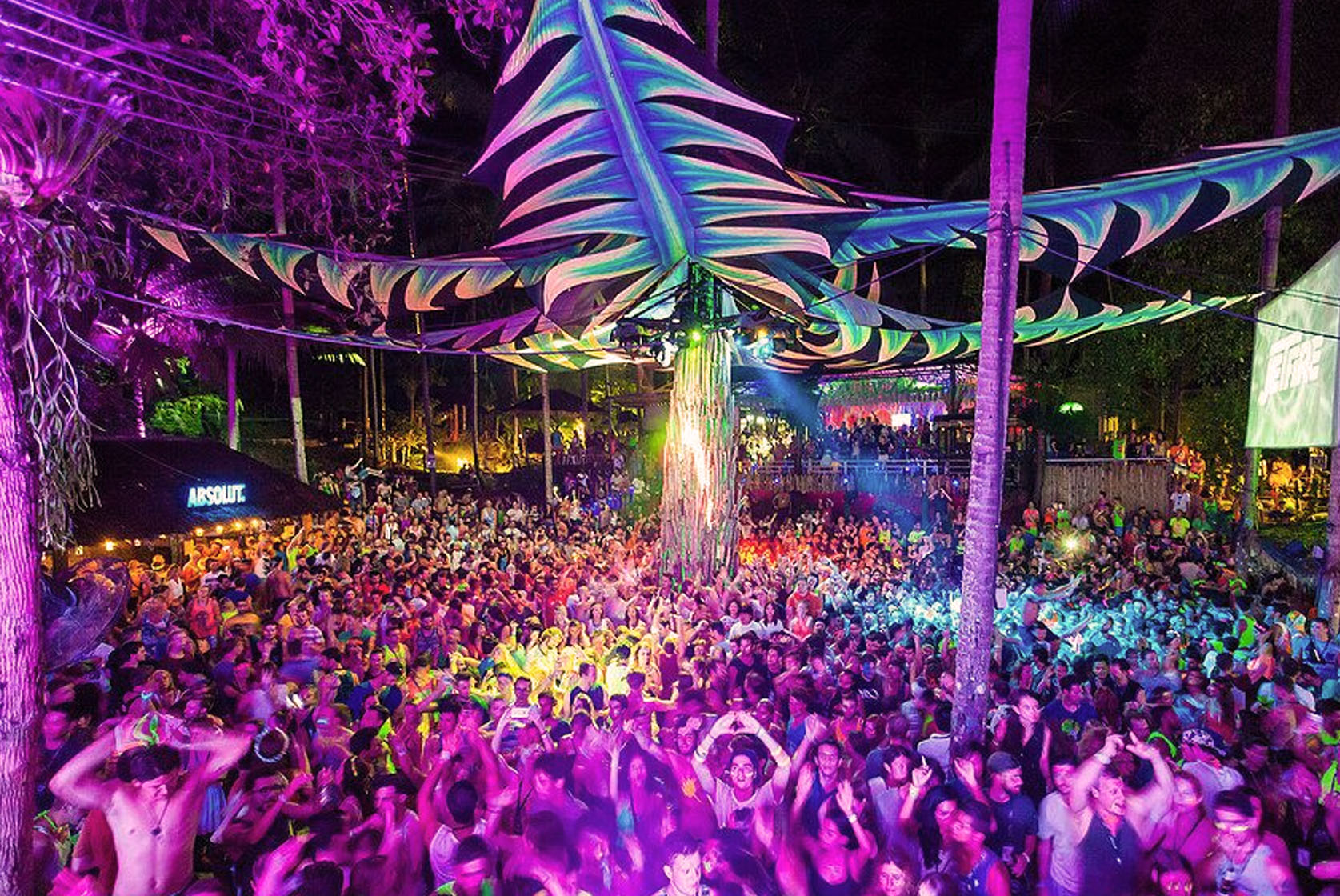 The Half Moon Party, officially Half Moon Festival, is known for symbolising the power of freedom, free expression, love and unity. Among the well known international open air parties on Koh Phangan, the festival is one of the most acknowledged and famous of all. This techno, house and urban party is held twice a month in the mystical rainforest on the island.

1. Complete Half Moon Festival schedule
2. Tickets and entrance fees
3. How to get to the party
4. Hostel and hotel recommendations
5. About the venue, vibes and stages
6. Food and drinks
7. Facts and figures

The festival takes place every two weeks. As the name would suggest, the party is on the night of the half moon. In other words, one week before and one week after the official Full Moon Party. If you are not on Koh Phangan by this time, no worries. There are a lot of alternatives where you can go. For example Black Moon Culture, Jungle Experience and Sramanora Waterfall Party. Check the agenda for the complete list of parties when you come to Koh Phangan.

Tickets for Half Moon Party Koh Phangan are available via the official website. Online ticket sale will be closed at 3pm on the festival date. After 3pm tickets can be purchased at Sunset Walk or at the festival gate. There is no refund for cancelations two weeks prior to the festival date.

3. How to get to Koh Phangan

There’s no airport on the island. However, ferries are leaving daily from Surat Thani on the mainland. You can also travel from the nearby islands Koh Samui or Koh Tao. Ferry tickets can be booked in advance via 12go.asia or via local travel agencies.

Koh Phangan is a wonderful place to stay. There’s accommodation all over the island. The most (but definitely not all!) of the nightlife is on and around the beach of Haad Rin. For the best party experience, you might want to have a place to stay in this area, so you can be close to the action.

But if you looking for a nice hotel or hostel near Half Moon party, then we have 6 of our favourites here for you! Make sure you book in time. Around the Half Moon Festival often all (the nice) hotels and hostels nearby are fully booked. The closer you get to the actual night of the party, the more you’ll need a miracle to find something — at any price range ;).

5. Music and stages at the Half Moon Festival

When you first enter through the gates there are a number of stalls to your left and right. There, artists are available to do black-light body painting at a cost, but it’s much more economical to do that at your hostel before-hand. Above all, it’s also a lot more fun to do it yourself! Close to the entrance is also where you claim your free drink, so you can get the party started nice and early!

There are three stages at the Half Moon Party: the Tribal Stage, the Funky Stage and the Urban Stage. Firstly, the Tribal Stage is the main stage, offering the biggest acts of the event. There you’ll find international DJs playing the best electro, psy-trance and underground bangers. Mix in some epic lights, pumping tunes and a huge dance floor and you’ve got one hell of a party!

Secondly there is the Funky Stage. This is your place to go for House music and has a more mellow feel to it compared to the Tribal Stage. Further there is the Cave, which is the Urban Stage, plays your classic hip-hop and R&B tunes in an underground cave of lights, smoke and UV paintings.

Along with the stages there is also a section to buy food and snacks. The food at the Half Moon Party is simple with pizza, Thai food, etc. and it’s actually pretty reasonably priced for a festival. If you’re planning on a big night you might want to eat before you get there to avoid cutting into party time, as well as pre-lining that stomach!

7. Facts and figures about the Half Moon Party

You can find out more about which cookies we are using or switch them off in settings.

This website uses cookies so that we can provide you with the best user experience possible. Cookie information is stored in your browser and performs functions such as recognising you when you return to our website and helping our team to understand which sections of the website you find most interesting and useful.

Strictly Necessary Cookie should be enabled at all times so that we can save your preferences for cookie settings.

If you disable this cookie, we will not be able to save your preferences. This means that every time you visit this website you will need to enable or disable cookies again.

This website uses Google Analytics to collect anonymous information such as the number of visitors to the site, and the most popular pages.

Please enable Strictly Necessary Cookies first so that we can save your preferences!